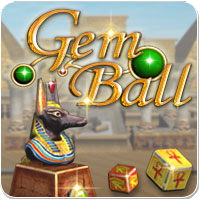 Gem Ball is a new amazing 3D arcade from URSE Games, which changes the approach to the “don’t let the ball fall” games. URSE Games has successfully achieved the goal of combining in one game the elements of arcade and puzzle. In Gem Ball it is not enough to simply keep the ball going. You are to follow certain strategy as you can win only by triggering a chain of events. Gem Ball offers a wonderful adventure where the myths of Ancient Egypt will lead you through perilous dangers to achieve the great goal of restoring the long lost gifts of Amon Ra, the King of Gods.

Gem Ball boasts graphics so amazing that sometimes you want to play certain levels once again just to enjoy the view. While making progress through 150 levels of Arcade mode or exploring the map of Adventure mode, you meet a great variety of colorful artifacts, most of which are both creativity and graphics masterpieces. One more credit Gem Ball deserves for its music which, unlike music in many other games, never makes you tired. Gem Ball is a 3D game and to make the 3D feeling even stronger, URSE Games developers introduced such an attractive feature as multiple-angle view of the game field. It seems URSE Games took care of everything: even tiny things, such as the usual arcanoid problem of the “last brick” that so often steals gamer’s precious time. This problem is solved by introducing “Megalaser” artifact that appears just before the end of the game and helps you to get that last brick. One more advantage of Gem Ball we shouldn’t forget is its ability to teach – while playing you get very well accustomed with Ancient Egypt mythology.

The beautiful graphics, involving plot and creative gameplay will make Gem Ball a real diamond in your collection of arcanoids. Gem Ball is waiting for everyone ready to test their gamers’ skill. And speaking of beauty – simply download Gem Ball and see with your own eyes how great lava “Explosive ball” artifact looks. Come, your adventure is waiting for you!